The Psychological Study of Typography

This might all be a bit arcane for most people but as everyone these days reads typeset text (when did you last get a handwritten letter?) then it’s just as well you know what underpins the science and craft of typography. It’s right that I should return to this topic as of late I have been diverted into all kinds of rantery on unexpected subjects. 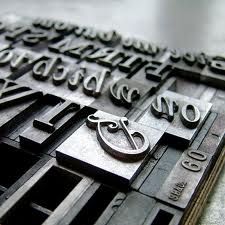 Hand composition: In the early days (like 4-500 years ago) at the inception of typesetting, many of the rules of type were defined by practical considerations of hand composition like the width and length of metal segments, whether actual characters or blank line spacing (ie leading) and the options were very limited. There were no rules really. Whatever sufficed. It was an imitation of what could be done very skilfully by hand. But with all this new 21st century digital gadgetry at our disposal, we can dial in absurd point sizes like 25.578pt if needed, which leaves the process of hand-set type so far behind but also opens the door for an unholy mess. Computers were not initially created for design use but as business machines, and their use of type initially was horrendous. The ubiquitous Times New Roman and Palatino, fine typefaces in the right hands, were thrown to the masses as they were included in every PC sold since 1985, and the result was typo-anarchy.

e-books: With e-books you can now adjust the size and style of the font and whether the text is left, right or justified. One dyslexic I know of, claims that his inability to read easily was because 99% of typeset text is justified, creating a continual variation of inter word space which can confuse the eye. With Ipads, Kindles etc you can adjust the text till you can read it with ease whether you are a child, middle aged or elderly, each group requiring a different size type. You must have seen in your local library large text books for children or for old people. But there is much more to a comfortable, even inspiring reading experience than just point sizes and word spacing. Which is why a lot of designers are unhappy with what e-book readers are giving to us all. Read on. 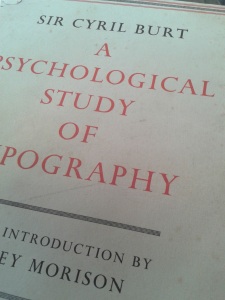 I’m relating some of this from an excellent and long out of print book by Cyril Burt, printed in the mid-1950s in the UK by Cambridge University Press—The Psychological Study of Typography. The book itself, finely designed and typeset in hot metal and printed on quality slightly off-white cartridge is an example of the classic (and timeless) school of typesetting to which I firmly adhere and which makes reading (and typesetting) a pleasure and not a chore. He does appraise a few of the text faces available at the time 60 years ago but more than that, he gets right into the exact process that is going on as your eye scans the page leaping from word to word and from line to line and what tires the eyes and what doesn’t. Cyril Burt’s book is meticulously set in Times New Roman, the most common of fonts, and it’s as you have never seen it used before. No coincidence that he found it the most readable of typefaces in his researches. I realise that times have changed and that the common man has been given a power that was confined to specialised trades in the past. Which is why it is important that the common man now gets to grip with some of the knowledge hitherto hidden in trade print shops and typesetting studios. 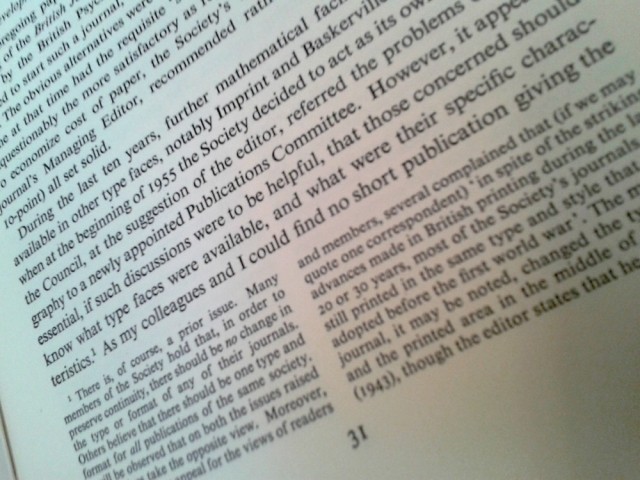 He determines the relative optimum line length and leading for given type sizes and the essential ‘colour’ of the text i.e. lack of what are called ‘rivers’, white gaps caused by excessive inter word spacing, all to provide an easy reading experience. Even the density of the ink is critical to the reading experience. How the text sits on the page enters the realm of golden section ratios, the age old traditions of page design (influenced by hand scripted bibles) and in some case just what the publisher can afford in term of real estate. Publishers of trashy airport thrillers will often print on as much of the page surface that is decent and on the cheapest paper available. Most publishers will admit to having to make compromises on print area as wide margins put up the price. There are no fixed rules on this but a page of text (and or images) either pleases and is readable or it isn’t. Cyril Burt’s book is a guide and in a sense does lay down rules. But as with everything, rules have to have meaning and a purpose and often stretched where appropriate.

A summary of the intent behind the book could be stated thus:

If this subject really interests you, I suggest you look for an original edition on the internet – for a price between $30-60. It is a specialised subject but one of these these subtle things that impacts on our daily lives. Useful knowledge in other words. This applies equally to the typesetting of arabic as well.

3 Responses to The Psychological Study of Typography