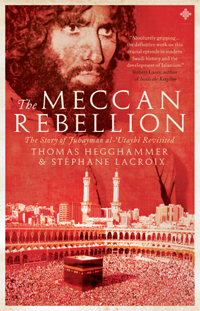 A new book, The Meccan Rebellion, by Thomas Hegghamer and Stephane Lacroix  has just been published by Amal Press, Bristol, and typeset by yours truly (not the cover I should add) and is now on sale. To quote some of the blurbs: “A skillful and scholarly blend of the theological , historical and contemporary contexts to the storming of the Grand Mosque in November 1979. It offers insight into Saudi religious politics … essential reading for students of Islam and Terrorism Studies“ (Professor Max Taylor). Also “Crucially documents some of the key doctrinal and legal disputes which divide the various Salafi schools in Saudi Arabia.” (Abdal Hakim Winter).

This is not intended as a review but I have read the book and it was surprisingly interesting. Recommended for the ignorant Sufi who glares across the room at the suspected Wahabi, as it explains the intricate history of how, for instance, the Salafis came into existence as the Al-Jama’a al Salafiyya al-Mutasiba in the mid 1960s in Medina under the influence of Muhammad Nasir al-Din Albani, intent on purifying what they perceived as innovation and misconceptions of the official Wahabi establishment and also in other influential groups like the Muslim Brotherhood and the Tabligh Jamat.

The mummified head of Cromwell

It seems once you are committed to enforcing a puritanical path, like Oliver Cromwell, it never stops until you yourself are completely purified i.e dead – rather like Oliver Cromwell, whose severed head sat ignominiously on a 20ft spike above the Houses of Parliament for many years before being taken down and sold off in a junk shop and and finally buried in Sydney Sussex College, Cambridge in a secret location. A warning to religious fanatics everywhere who want to purify everyone.

Of course The Meccan Rebellion focuses on the occupation by Juhayman al-Utaybi and his followers of the Haram and the subsequent siege. Unfortunately the man they believed was the Mahdi (identified in a dream by al-Utaybi) was shot and killed after three days of fighting which rather punctured the plan….  In 1997 in Jeddah, I met the Eritraen Idrisi Shaykh, Muhammad Abu Bakr, may God reward him, who narrowly escaped the siege and the taking of many hostages, by climbing out of a window in the Haram as the siege began. Bullet holes still remain apparently in the walls from that event. Like Oliver Cromwell, once they had surrendered, sixty of al-Utaybi’s followers were executed – they had their heads cut off.

I’m not that interested in history really having been hauled unwillingly around too many  Norman castles in Wales in my youth, but The Meccan Rebellion was peculiarly fascinating as its subject matter impinges directly on all of us and is an essential background to dealing with extremist currents in the modern world and understanding their roots. The only other historical book which I have found equally gripping is David Fromkin’s great book A Peace to End All Peace about the creation of the modern Middle East. It covers the period of time just before the fall of the Ottoman Empire right up to the mid 1920s. I found it utterly fascinating as it showed so clearly the great mess of history and the fog of both war and peace. No-one should look at the modern world and what is happening on a daily basis without referencing it.