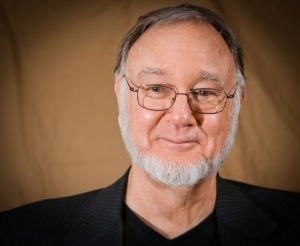 The 20th May just gone was Mohamed Zakariya’s 7oth birthday. He is not that well known outside the rarified atmosphere of Ottoman calligraphers but he has had a great measure of influence on people like myself over the years. His birthday was celebrated by a small group of his students in DC last Sunday which I was unable to attend but I want to record here something of his work and my own encounters with him. He is a fully fledged American, growing up in Santa Monica, California, where he taught himself arabic whilst working in a machine shop. But it was arabic calligraphy that became his forte. But he only achieved his  ijaza in the art, fairly late in his life. I clearly remember him telling me that after he began his studentship with Celebi, his master teacher in Istanbul, that all his earlier work was ‘no good’ or ‘rubbish’…I don’t remember the exact words. I know how he felt as I have often felt like that myself about much of what I do, but I would be quite happy with some of his cast off ‘rubbish’. 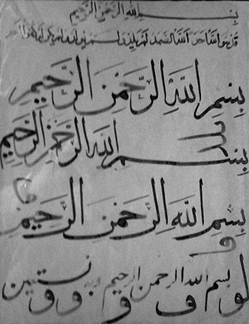 I first met Mohamed Zakariya in 1975 (or thereabouts) at his house in Washington DC where he gave me a rapid introduction to the fine art of Ottoman arabic calligraphy. I still have the page he wrote for me then (illustrated left). It was the first of many calligraphic pieces by him which I have accumulated over time as well as beautifully written letters and artwork (as well as, interestingly, some blocks of Eid postage stamps that he created for the US postal service). In 1975 there was little or no market for a calligrapher in the west, no matter how good,  and Zak (as I shall refer to him) was having to build kitchens at the time to make ends meet. But his house was an Aladdin’s cave of not only his calligraphy but working brass astrolabes and astronomical instruments, fine crafted boxes of pens, knives and burnishers and pens, cupboards, tables, beds, all made by him with non-electrical tools. All of it glowing with a kind of Ottoman magic.

He was the first proof I had that it was possible to produce high quality art and craft from scratch i.e. from basic materials. He said at our first meeting that the best ink, pen and paper you will ever use is the ink, the pen and the paper you make and prepare yourself. The same applied to pigmented colour and the use of gold leaf. This is a wonderful paradigm for self sufficiency but not as some kind of Luddite revenge on technology. It was really that the paper, the ink, the paper you made yourself really is better and that we have all been shortchanged by the commercial dumbed down equivalent that you buy in Rymans or Kincos or whoever your local art suppliers are. Because it is possible to be in control of the process from beginning to end it gives the calligrapher an overview of the whole process enabling him (or her) to refine, control and perfect the end result. When the veil is lifted you see suddenly how in the last hundred and fifty years the process of paper making, pen and ink production has been utterly usurped and commercialised in the name of convenience, not really to improve writing, but to make money. In recent years of course it has meant the wholesale abandonment of handwriting as an art.

Obviously we cannot expect everyone to make and prepare paper, pens and ink, or write brilliant calligraphy but neither should we wish that this knowledge is lost. I have always asked students of mine what would happen if tomorrow it all collapsed and you couldn’t buy these very things. Would life as we know it continue? If you value knowledge and its preservation and dissemination you will appreciate why this is a useful and almost obligatory knowledge to acquire. Zak seemed to have tapped a rich well of this knowledge and, as I said, I have personally benefitted greatly down the years from his researches and his example.

In my own line of of work, knowledge of calligraphy and its supporting crafts is vital, even though I myself have never qualified with ijaza in the Ottoman calligraphic craft. I went so far with it and only do it badly, but it did open my eyes to that world like nothing else ever could have done. To do it well is difficult and requires years of practice and guidance.

The Andalusians were less fussy about their calligraphy. It was primarily functional although for such things as Qur’an and poetry it would be beautified. Writing was principally for recording and disseminating information, translations, religious, legal and scientific works long before printing was ever a reality. This is why you don’t find very often calligraphy as wall decoration in Spain and Morocco as you do in Turkey and elsewhere, but mostly in books and manuscripts. It did appear in buildings as in the Alhambra and the great mosque in Cordoba, but very restrained.  Zak knows this writing style and you will see his Andalusi script published in books like the cover of the Aqida of Imam Tahawi (below) and the text of the Burda of Busiri (left) from Zaytuna and Sandala respectively.

There is a link to his web site on the side bar.