From Mods to Mecca

Nostalgia has always been big business. Look how the Victorians ached for a romantic gothic past and the Edwardians for a rapidly disappearing bucolic world with the arts and crafts revival. To find my own past the subject of a nostalgic movement was for me a bit of a curiosity as earlier this year saw the release of Flashback (3rd edition), a magazine for folks for whom late 1960s prog rock was a great forgotten period of British music.

Its featured article was entitled, eye-catchingly, from Mods to Mecca. This arcane genre of music is not necessarily the realm of bald headed,  grey haired freaks, but apparently  people of all ages (mostly blokes I imagine). Richard Morton Jack, an Old Etonian who is in his early 30s, publishes the magazine dedicated to this prog rock period from about 1967-73 and wrote From Mods to Mecca a 39 page feature about my erstwhile friends and co-musicians of the rock group Mighty Baby which was born in 1967 out of the ashes of the great London 60s mod band The Action. Mighty Baby floundered in 1971 for many reasons which the article describes in detail.

Aside from whether you like the music, (you don’t have to) it’s an unusual story of how a group of musicians of mixed English backgrounds (middle and working class) met up in 1967 and after a jolly few years playing music just about everywhere and with everyone, ended up with firstly a real Sufi brotherhood in North Africa, meeting one of the truly great muslim saints of the 20th century, and subsequently going on the pilgrimage to Mekka. (Well three fifths made that journey.) The article, richly illustrated with photos and newspaper cuttings, is 99% accurate, historically speaking, unlike previous histories which were pretty fictitious and incomplete. Richard Morton Jack dug up things I had completely forgotten about and found photos I had never seen before. The band’s music was also featured in May this year on Stuart Macone’s BBC radio 6 show called appropriately The Freakier Zone.

To the establishment you can’t mention things like Glastonbury or names like Jimi Hendrix or George Martin in the same breath (or article in this case) as Islam and the Haj or Sufi shaykhs. Almost like oil and water. But Richard Morton Jack courageously tells the whole story and leaves the reader to judge for himself. I say the establishment, because when Cat Stevens was embraced by Islam (it’s interesting to phrase it that way round), the UK establishment did their best to slaughter him. Though well intended, Yusuf put his head too far above the parapet and just didn’t have enough media savvy to deal with it, but also Islam, the religion. was something not wanted in the public discourse as something rational and an option to be considered by ordinary people. So at every opportunity journalists (the voices of the ruling establishment) set out to trap him and resurrect all the old canards about oppression of women, the Satanic Verses issue, jihad and so on. I was personally present at a live BBC radio interview with Nicky Campbell, about Yusuf’s Bosnia War CD when his opening question to Yusuf was “how can you follow a religion that condones the rape of women?”  This gives you an idea of the deep seated hatred and ignorance of anything to do with Islam that is dormant in the British psyche and which I believe goes back to colonialist times when the British were heavily brainwashed against the Turks, Arabs. Africans et alia, just about everyone the British were colonising and whose lands they were plundering in the name of Christianity and progress. That’s another story but is the background to the Mods to Mecca narrative. 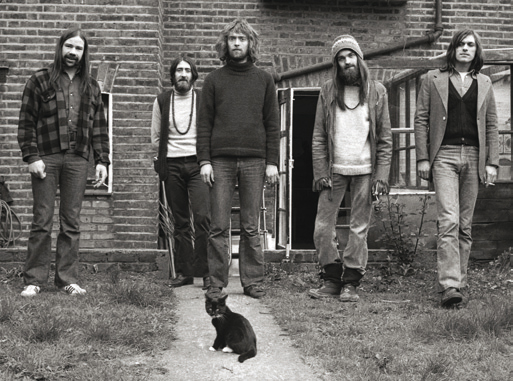 To me it still seems impossible now, in fact almost miraculous, that this was to be our destiny – from just itinerant rock musicians to hajj pilgrims. The Flashback article reveals the complete story, which for me is both gratifying, shocking, sad and bizarre all at the same time. It’s from so long ago that it seems almost to be about someone else, not me. But in case anyone thinks it just happened out of the blue, let me put you straight. In fact the direction the music was taking, the chemistry of the band, the books studied on gigs and so on, all led to this amazing conclusion. Both a logical and a theological outcome. The music was the means to the end and let no-one tell you otherwise. Some say we arrived at the gates of a Islam in spite of the music. I beg to disagree. It not only took us to the gates, but through them and on right up to this day. I am the same person now as I was then with just less negative baggage and with accrued wisdom from the journey. Music is very powerful and a hot divisive topic amongst muslims but my experience convinced me that with a good heart, music can serve you and give an uplift and ease to the heart like nothing else. Of course it has a satanic side, what in the realm of human activity doesn’t, but to disparage music purely for doctrinal reasons is senseless. It’s another subject but not to be explored here.

For many years we were all frankly embarrassed by the whole thing and nobody wanted to talk about it. I think this was partly because of the horrendous collapse of our Sufi community in 1983 and the considerable antipathy toward its leader whose shenanigans had destabilised too many lives and families in the 1970s and a drama around which there was a kind of omerta, a traumatised silence. We didn’t want people to know what had been going on out of a sort of twisted shame. But this silence was also because the music Mighty Baby had been playing was nothing to do with commercial rock music but more of a mystical adventure set to music and words, which we knew few would understand. And it all got mixed up with what came later and all the Sufi capers. It had been a journey into the spiritual unknown for all to see. The story is spelled out in the song lyrics of the final album Jug of Love, and particularly in the lyrics of Martin Stone, the wizard front-of-stage guitarist. This final swan song of an LP told the story of the spiritual awakening of this pretty unknown group of musicians and what they were experiencing right at the time the record was being made. When it was released the record companies and music press unsurprisingly missed all these subtleties, but a recent review of the band’s last album that appeared in Rolling Stone magazine, when it was re-released on CD (and vinyl),  expressed it succinctly.

“Mighty Baby were original acid-country mystics: remnants of a great British mod band, the Action, that went psychedelic in the late Sixties, then turned down the amps and amped up the prayer. By the time of Mighty Baby’s second album, A Jug of Love, issued in Britain by Blue Horizon in 1971, most of the band members had converted to Sufism, the mystic Muslim sect, and the record is aptly meditative: slow, extended songs of self-examination sparkling with fireside harmonizing and the gently serpentine lead guitar of Martin Stone. Although Mighty Baby, as practicing Muslims, subscribed to a natural high, the record’s vibe is more stoned than sanctimonious, a trancelike blend of the Middle-era Floyd, the Byrds circa Ballad of Easy Rider and how, I suspect, the Grateful Dead sounded in early rehearsals for American Beauty. A Jug of Love, a big-money rarity for years, has finally been issued on CD by the Sunbeam label. It still overflows with sweet OM.” (David Fricke)

So in the last ten years I have grown to accept that period of my life, who I was, profane language and all. As far as nostalgia goes, I am not nostalgic for that time as it was hazardous and chaotic as well as exciting– creative and destructive simultaneously. Many of the people I knew and worked with from that time are now dead. They died from lifestyle poisoning. So don’t get too dewy eyed for this lost epoch. But reading about it might just open someone’s heart and mind all these years later and how remarkable things come out of the most unlikely situations. It did happen and it’s all true although the Flashback story is only part of the whole picture which will be told some day I hope.

If you are curious to read more about all this caper you can either buy the 208 page magazine or download a pdf from www.flashbackmag.com. Several Mighty Baby albums are now available from Sunbeam Records in London and can also be downloaded from Itunes.

6 Responses to From Mods to Mecca