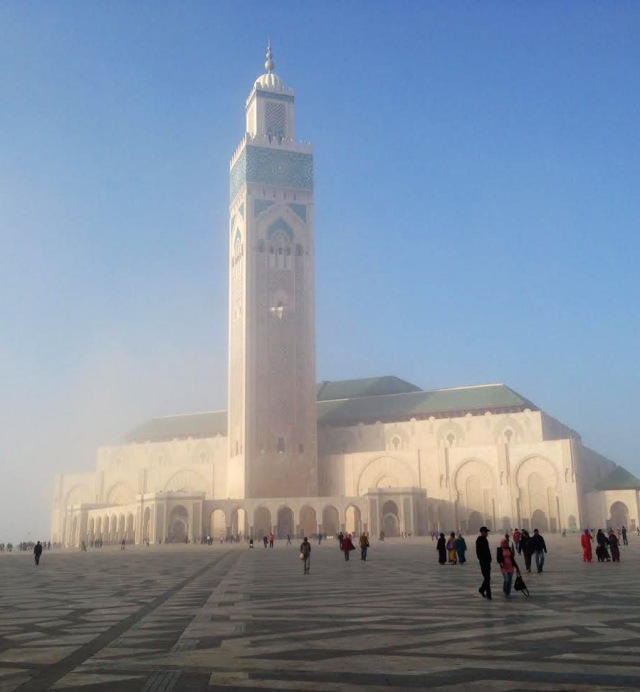 I have just returned from a few days filming in Morocco which was an attempt to revisit the time myself and a bunch of young white English and American men and women first visited a venerable Sufi master and his people in the medieval city of Meknes over 42 years ago. I believe the film is an attempt by the producer to find out why and how it all happened and why such people, from often privileged and educated backgrounds, would go against the Christian and patrician grain of English society of the time and embark on what was, ostensibly, such a difficult journey.

The film, which is being shot in several countries, is also trying to trace the history of this nascent community in England, it’s successes and failures and why after ten years it started to fall apart. Any such documentary was likely to look under the scabs of old wounds and to see if there was any way some fences could be mended and some demons expunged. I’m not holding my breath, as rebuilding trust after a divorce is well nigh impossible; but the children of the marriage, the next generation, have a chance if it fully understands what happened and then re-buries the corpse after the post-mortem. Then I think we could all breathe a little bit easier. Some oxygen pumped into this stagnant pond wouldn’t be a bad idea. And I’m saying this to all concerned. Let’s see if the director has the courage not to sterilise the story and cut out the uncomfortable bits of the movie.

I’m tapping this post in Casablanca airport having been snared by failing to check-in at Terminal 1 in time (they closed it an hour before the flight!) and then change to Terminal 2 to catch the plane. Shades of Lauren Bacall and Humphrey Bogart who also had a few problems at this airport. So I had 24 hours to have a quick shufti of this sprawling city, Morocco’s slightly grubby commercial capital.

Initially the traffic in Casa is quite alarming, as cars, pedestrians and carts of vegetables and chickens seem to have independent ideas of who owns the road. But now I believe there is some kind of invisible angelic bubble wrap allowing cars to bounce off each other without actually colliding. Not once did I see a collision, though every minute it seemed inevitable. I also had a quick peep at the enormous Hassan II mosque on the sea shore, enshrouded in a mysterious sea mist, with hundreds of Sunday strollers wandering across its vast concourse. Nice, but a few trees and seats wouldn’t have gone amiss. (see pic above)

My drive to the airport from Meknes was with a fine young Morrocan from the family of the big shaykh we first met all those years ago. He explained in good English how this generation of westerners and Moroccans too, have a confusion with simple word definitions. One of these is the word shaykh which young zealous Muslims get confused about. He said that to a Moroccan,  anyone who is your teacher is your shaykh (often the father of the family) and oddly how certain notable men of high repute in recent times have refused the appellation shaykh even though others would address them as such and wish them to be it. This is why I find it faintly amusing when I get emails addressed to shaykh Ian. I have white hair but shaykh? – I don’t think so. A bloke I will always remain.  Also when a teacher is a master of any discipline he would rightly be called a shaykh as a term of respect. A man or woman might have many shaykhs or teachers. The problems start when a man or woman claims this title as if it bequeaths some divine right of unchallengeable authority, which of course it doesn’t.

“We are not a people of claims”
The words of an eminent Moroccan scholar.

Morocco remains a place of wonders after all these years and certainly where you learn the true meaning of qabd and bast. (The divine contraction and expansion of the heart).

Last thought: why do travellers in the third world have such enormous suitcases?