A typo, or typographical error, is a fairly commonplace thing and an inherent danger of the printed word. Historically such errors have at times produced catastrophic and very costly results. The lack of a hyphen in some computer coding cost NASA hundreds of millions of dollars in an aborted rocket launch and there are many more such examples. But by far the worst and most deadly typo in history is that of the Mardin fatwa written originally by Ibn Taymiyya (d 1328) who was from the Mardin area of Turkey at the time of the Mongol invasion. http://en.wikipedia.org/wiki/Ibn_Taymiyyah

To scholars and students of this subject, this fatwa problem is well known, but for many who are not familiar with the subject, it is worth revisiting here as the fatwa is suddenly of immense topicality. The text was, and is still used by many militant terroristic groups to support and justify their killings of countless numbers of innocent people. From those who assassinated Anwar Sadat on the 6 October 1981, to Al-Qaida and more recently the hordes of ISIL, this was their pretext. And they all got it wrong because of a misprinting. If this isn’t a cause for the most bitter remorse and regret, I don’t know what is. More information on this here: http://muslimmatters.org/2010/06/29/the-mardin-conference-–-a-detailed-account/ 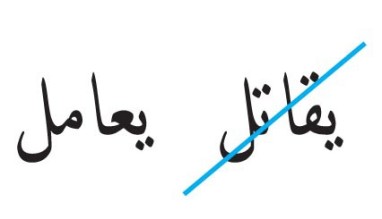 Left: The contentious words in arabic. The ‘ayn’ could have been mistaken for a ‘qaf’ but the other letter is clearly a ‘mim’.

The relevant part of the fatwa text (in Arabic) was  yu’āmal (trans. should be treated), but the word was rendered yuqātal (trans. should be fought) in subsequent printings. This typographic error changes the meaning of the phrase drastically. Was it malicious? We shall never know. I believe Ibn Taymiyya would have been astonished to see how this typo changed its meaning and how it became a mandate for some to kill anybody who they considered an unbeliever (takfir). The ISIL insurgency currently threatening the whole of Iraq and Syria is turning into a mindless Mongol-like invasion of its own, very much like the original invasion of Ibn Taymiyya’s homeland that drove him to flee.

The detective who unearthed the Mardin Fatwa error was Sh. Abdallah bin Bayyah, the  distinguished Mauritanian scholar, who tracked down the oldest written version of the fatwa from the Asad library in Damascus, and it is no coincidence that he is the one scholar who is currently presenting wise counsel in this very difficult time. He addressed the UN last week on the subject of terrorism and was also quoted by Barack Obama in his own address to the assembly. It also made it to many front pages of newspapers around the world. He stated rightly that bombs do not change ideas and that the only realistic course is teaching the next generations that the pursuit of terroristic violence is not a path to paradise and is contrary to all Qur’anic and Prophetic teaching. And that it will take time. Because of his stature and the respect Shaykh Abdallah commands in many communities across the whole spectrum of Muslims, we all hope and believe that, deo volente, his guidance will filter down through the layers of lesser scholars, teachers, imams, students, colleges, seminaries, mosques and families to reaching the minds and hearts of those most vulnerable.  A war on war to create a peace upon peace – in his words. The more people read what he says the more they will understand the real nature of this problem and its remedies.

Left: Sh Abdallah Bin Bayyah in the NPR interview linked below with his book The Culture of Terrorism.

I have mentioned before in this blog the perils of translation and the heavy responsibility of those who undertake it, especially with religious texts. Likewise those who prepare texts for publication. This is not unrelated to a book I have been reading, recommended by a friend, called God and Logic, the Caliphate of Reason by John Walbridge, (CUP) He is an American  (protestant) professor of Near Eastern studies in The University of Indiana. It’s about the history of rational thought in the Muslim world. Like a lot of academic writing much of it glides over my head but what I did understand was thought provoking. My first impression is that Professor Walbridge does not really grasp entirely the idea of experiential knowledge and that the intellect is the isthmus between experiential knowledge (like tasting something) and formal knowledge (reasoning something – a subject on which he is expert). In his introduction he rightly points out that for a millenium in the Muslim universe, books were taught by authorised teachers which were hand copied by the student who then taught it to the next generation often with memorisation of entire books. The authority to teach and pass on the knowledge was paramount. Unlike the influential salafi, Muhammad Nasir al-din Albani in the 1960s in Medina, who prided himself on how few ijazas (certificates of authority to teach) he had, if any. The tragedy of the modern Muslim is this notion that you can teach yourself everything from the source texts.

Not till the 18th century did printing begin in the Muslim world to disseminate this knowledge amongst ordinary people. The end result of course is that we have the tragic situation now where any unqualified person with a hadith collection can pronounce fatwas on matters of law etc., and the consequence of course has been a disaster. This was a very potent knowledge and protected by means of the teacher-student chain for a thousand years. The huge and potentially dangerous pharmacy of traditions was suddenly thrown open to any self-medicating lunatic to destroy himself or others, by-passing the doctors who knew how to prescribe medicines from the pharmacy and how to treat sickness. It was like handling and spreading plutonium around the world without its thick protective lead insulation, leading to a subsequent nuclear accident of global proportions. So we can see clearly how powerful books and the texts they contain are and how they impact our lives.

Until I began designing books for a living in the 1980s, I had little interest in books and only almost by accident did I start working with publishers, mainly the Islamic Text Society in Cambridge, and with Brian Keeble, a classic book designer and artist who helped establish a high standard of book design for ITS, like Lane’s Lexicon, Martin Lings’ books and the early editions of the Ihya of Al-Ghazali translations which I worked on. I was hired to help bring their book production into computers as the old photosetting systems and galley proof techniques were being phased out and Brian didn’t wish to have anything to do with these technological changes. I owe a lot to his knowledge of classic typography.

What I didn’t know was that I was being sucked into a new universe of knowledge and words and ideas which the world from which I had emerged had insulated me, and made my previous life seem like that of a dilettante who was happy to read the occasional book on metaphysics, PG Wodehouse and computer manuals. How many times have I seen the narrow book collections of people embedded in sect-like groups, of many different persuasions, who only allow the books of their fearless leader on their book shelves. And how often have I seen the huge libraries of serious scholars.

So books are there and they mean something tremendous but it needs an expert to bring out this knowledge. What I am very aware of now is how the content of the book also needs to be honoured in the quality of its translation if translated, its editing, proof-reading, design, paper quality, binding and so on. It has be an act of faith as much as an act of commerce. I’ve campaigned for this often on this blog. The least we can do is create something of the highest quality and beauty that we can afford.

We don’t live in the middle ages and if printing opened this Pandora’s Box of knowledge then the internet is spraying this knowledge from high-flying aeroplanes. I don’t have the answer to this as the Muslim world is in a massive upheaval right now and only some cool-headed scholars have the means at their disposal to guide it back to some sanity. This is why we can’t easily just return wholesale to hand-inscribed books and one-to-one teaching as of yore. I love hand-calligraphed texts as much as the next man but calligraphy is not only for ornamentation or just hanging on walls. Originally it was for preserving and disseminating knowledge, and writing by hand was the only way you could obtain a book and access its contents.

This diaspora of knowledge by the printed word cannot easily be put back in its box but in a few places the traditional transmission of knowledge is still practised and taught in the manner described above and the effects of that, as it grows, will help to steady the ship. If the corruption of knowledge has been by means of printing and the internet by extension, then we have no choice but to use the same means to restore some sanity to the world of knowledge.

The publishers Sandala hope to release soon for sale to the public, a valuable text by the venerable scholar Sh. Abdallah bin Bayyah mentioned above, entitled The Culture of Terrorism, which has been sitting in my computer since 2008 but which was recently resurrected and printed in a limited edition for the Sept 25 UN conference on Global Terrorism where Barack Obama made his address, quoting Abdallah bin Bayyah in his speech. When it is released I will do a blog on it.