Write it! Sing it!

Where I live there are so many alternative therapies on offer up and down our valley. They include such things as underwater ti-chi to sacral osteopathy, magnet therapy, raw food cults etc., and many you have never heard of before. So one more may hardly be noticed. But I have happened upon what I think could be called quite legitimately a therapy and offer it along with the rest. It combines calligraphy and singing. Two quite different activities but when combined they have a dynamic and beneficial effect. This is why. 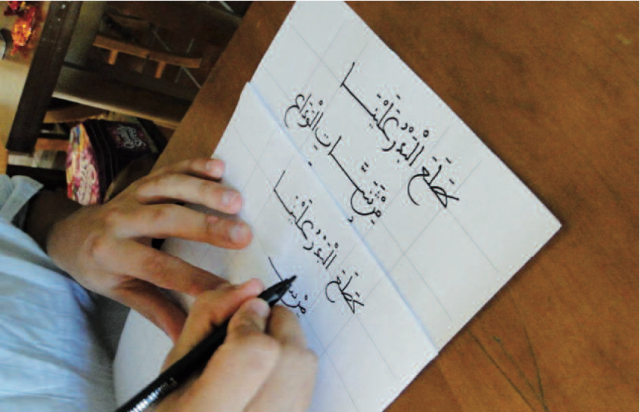 I have conducted a few Andalusi calligraphy courses down here in southern Spain in Andalusia over the past 8 years and they  consisted of teaching students, who claimed no previous skill in this field, to write very simple calligraphy of an old arabic poem in this ancient Andalusi script (pictured above). This kind of writing had previously come to an abrupt halt 500 years ago in Spain when arabic was banned by Ferdinand and Isabella, the conquerors of Granada. You had to face the Inquisition if you were found speaking arabic, writing it or owning books written in it. They piled the books high in the streets and squares and burnt them all. Burning people in auto de fes came afterwards. So writing in this particular style was like reconnecting the nerve endings of a civilisation brutally severed from its roots.

These courses would be held over a period of a few days with each student copying from an existing calligraphic sample. Calligraphy is by its very nature an exercise in hand eye coordination and requires stillness, neatness, concentration and awareness – brain activity in other words. The slightest tremor of thought is registered immediately on paper like some kind of seismometer indicating shivers in the earth’s crust. For people habituated to phone-texting and computer keyboards and the ever present TV remote, this can be challenging but with patience the struggle yields results. For people suffering low attention spans it can be a gratifying exercise as it produces good results quickly. Often as good as the sample being copied. Indeed I had students who after one day were producing good copies of this ancient arabic script, who previously had no experience with a calligraphy pen. It’s the beginning of an enjoyable process of self discovery. But it didn’t end there.

Come the evening the students would then meet in the enormous mosque attached to the Rosales madrassah (above), where the course was being held, to sing the poem which in the day time they had been copying. Write it! Sing it! was my slogan. The mosque had great acoustics which enhanced the voices. The act of singing is of course a totally different kind of exercise from calligraphy, requiring intense use of the lungs and the voice, two functions very closely connected to the physical heart. A voice coach trains the human voice using certain exercises, one of which is repeated strong out-breaths like that of  the sacred dance of some sufi brotherhoods. This strengthens the diaphragm and exercises the lungs, emphasis being placed on completely filling the lungs. Most people only use half their lung capacity and only by consciously lowering the diaphragm can full lung volume be reached. Hyper ventilation  can result but is not the point of it and is probably caused by incorrect breathing in the first place. This exercise is used by voice coaches to help people sing in tune and ultimately to have perfect pitch. So we would perform some of these exercises before trying to sing. And singing in tune is a real problem for people who have grown up in some Asian communities in the UK where music has not been encouraged or even allowed in the home and where things like singing and keeping time in a rhythm prove almost impossible to do.

Singing in tune in other words is not a psychological process but to do with developing physical harmony and well being. These two opposite activities of writing and singing seem to create an alchemy which produces nothing but good and is evidenced to me by people becoming happier, more relaxed, confident and expressive – even ecstatic in some cases. For some it was like seeing some insect unfurl its wings as it emerges from a long hibernation. Of course singing the poem in classic old Andalusian tunes was similarly reconnecting with a thousand year old tradition that only survived by retreating to Morocco where it carried on as a living tradition till now. This was the great ouvre of music that Ziryab created in the time of the Caliph Abdarrahman III in Cordoba a thousand years ago. It drew on Christian and Iberian music but was was based around the great maqamat tradition Ziryab brought from Baghdad. The maqamats are rather like the concept of sacred geometry but applied to sound, which you will find embodied in the music traditions of Turkey, Syria, Egypt and India – even China (and of course North Africa). They are God given harmonic sequences around which the melodies are composed and have probably existed in many previous civilisations. These harmonic sequences are known to have deep healing properties, especially for people with mental disturbance but also for people with just physical ailments. Music therapy is a fascinating area which it is worth making another post about as it having a revival in Turkey and needs reviving as a science.

As I said there is no psychology involved in recovering the ability to sing in tune and to beat a time in a rhythm. A healthy happy person will do this naturally from a very young age. But bringing these two traditions together which once flourished in Andalusia, is clearly a potent thing and is more than just any old singing and any old calligraphy. It has secrets. It’s a medicine and it’s recreation as well. It is is worth adding that in these times, people in the west generally sing much less than previous generations. It may have been hymns, or even great choral works by JS Bach or Verdi that we sang, even madrigals and folk songs or just standing round the piano singing pop songs. But it was singing. We enjoyed it.

The modern lifestyle does all it can to take us away from these kind of activities. It wants the masses to consume culture, not participate in it. It discourages ordinary people from artistic expression by making it seem that only experts matter or have any worth. Not that we don’t need excellence in these skills but not so that the rest of us become couch potatoes just watching others doing it – by yielding to mediated entertainment. It’s like slow murder, robbing you of your life. Getting off the proverbial butt has never been so important so get out there – write it, sing it!

1 Response to Write it! Sing it!