Above: A sample page from the forthcoming English Qur’an translation by Thomas Cleary with parallel Arabic.

About a year ago I reached blog saturation level which means I simply ran out of ideas to blog. My lightweight involvement with narcissagram probably diverted my energies elsewhere. Other factors meant I had no time to write. But I have had time to reflect on many things from architecture to music and all points between. One of the most interesting projects which arrived out of the blue was a fresh publication of Thomas Cleary’s translation of the Qur’an for a client in, of all places, Kabul, which now has a thriving community of young entrepreneurs who have decided business is a better option than the bloodthirsty pursuits of some of its older generation.

I had designed a first printing of Cleary’s English translation around 2002 for Starlatch (in a record 3 weeks) but it was now out of print. The project was to put together a new version with parallel Arabic text. No mean task and it meant inventing novel ways of marshalling the text onto the pages without interfering with the Arabic which could not be touched. It hasn’t been published yet but I include a typical page here to give a foretaste of it. This Ramadan I have been carefully reading it on an Ipad partly to absorb Cleary’s unique translation, which I love by the way, with the Arabic close at hand for reference, and partly to spot any little typos which may have slipped in. It’s like reading the book fresh for the first time. I’ll keep this blog posted on its progress. 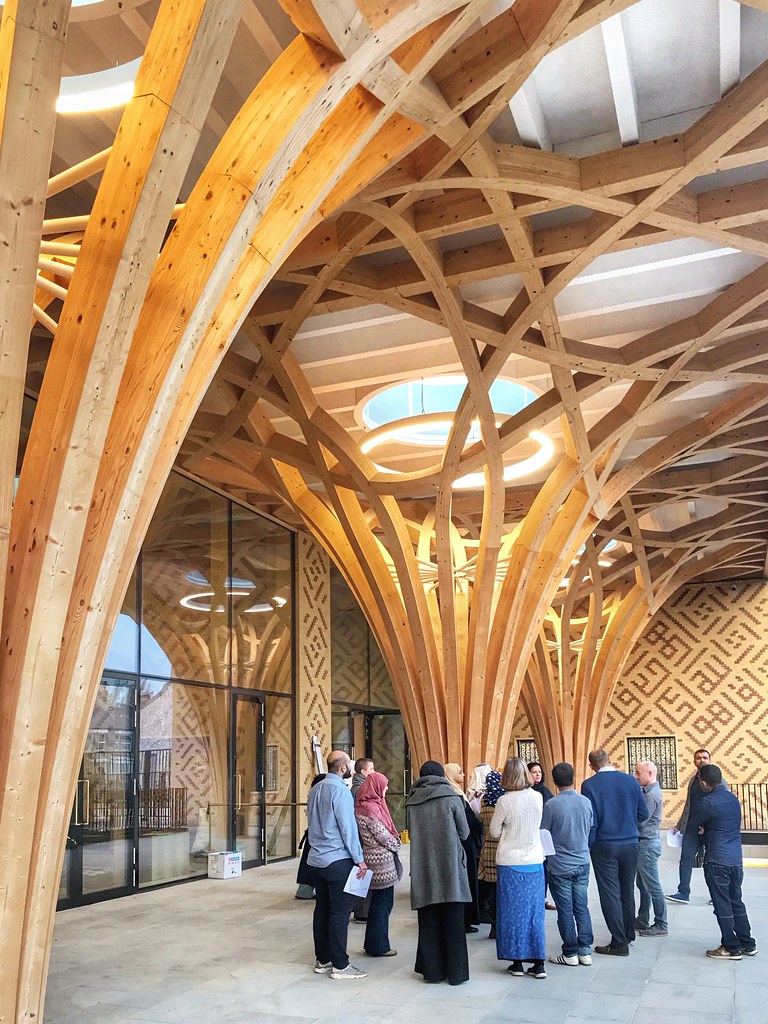 The other major event over this last year was the opening of the new £23 million Cambridge mosque. I’ve followed this with interest since the year 2000 when Dr Abdal Hakim Murad aka Tim Winter first toyed with the idea of, at that time, a madrassa in Cambridge for which I was asked to come up with some designs. The brief : Anglo-Ottoman! Nothing came of this idea as land was notoriously difficult to find in Cambridge. In the end the madrassa idea became the Cambridge Muslim College which is celebrating it’s 10th anniversary this year. The Mosque idea persisted however and in 2009 Tim Winter had an option on some land in the middle of Cambridge for a mosque which he managed to purchase with a loan from a Lebanese bank to beat the property developers all waiting ready to pounce with deep pockets. By this time I was firmly located in Andalusia but Tim asked me to come up with a design (also to be Anglo-Ottoman) for a thousand worshipper mosque on his purchased site with underground car park. I was given three weeks and it had to be fully costed. I’ll expand on this in a future post as it is quite a long story but the drawings managed to help raise the necessary funds to pay off the loan (of several million). After I’ve actually visited the new building later this year I’ll go into this in more detail and give a review deo volente.

2 Responses to Cleary with Arabic